Allez Français | Properties for sale in South West of France

Helping people buy and sell property in the Poitou Charentes and Dordogne Valley areas of France since 2002. We don't just advertise property. We sell it!

We have everything a prospective buyer in France may need, from Moulins, Maisons Bourgeoises, Logis and Farmhouses to Chateaux. We have a wide range of around 300 French properties for sale in the Poitou-Charentes region of South West France. More recently we have started to offer properties in the beautiful Dordogne Valley made up of Corrèze (19) and Lot (46) departments.

All of our French property prices include agency fees and the only extra is the Notaire's fees and Government taxes. We do not charge anything extra for so called 'hand-holding' unlike some agencies.

The Poitou Charentes, the area bordered by the Atlantic Coast on the west, easily accessible by car, rail or air, and renowned for it's fields of sunflowers, and the local vines producing Cognac or Pineau.

The Deux Sèvres has some hidden gems, such as the Marais Poitevin (Green Venice), the Pays Mellois (centred around Melle), with beautiful Romanesque churches, many lavoirs and other interesting buildings. Niort is the capital of the department, and has a fine town centre, with many excellent restaurants. The Charente Maritime is the sunniest part of the Atlantic coast (over 2,200 hours per annum), and is very well served by regional airports. Naturally, the area is best known for it's beaches & seafood, especially the oysters. Inland, the Charente department is dominated by beautiful rivers, (the Charente and the Vienne). You can visit one of the many Cognac houses in the town that gave it's name to the world famous liquor. The Vienne is also inland, most famous for it's Futuroscope theme park which opened in 1987.

Our Dordogne Valley business is centered around 2 areas, in the north the Perigord Vert and further south the area around Beaulieu sur Dordogne.

The Perigord Vert encompasses thriving towns such a Nontron, Brantôme and Mareuil-sur-Belle along with delightful villages such as Saint Jean de Cole and Verteillac. A large part of the Perigord Vert is classed as a national park and it is a region of rolling hills with unspoiled, verdant scenery split by fast moving streams, deciduous woodland and granite plateaux. Fresh produce markets featuring locally produced delicacies are a feature of the region, the largest of all being the weekly market in Piégut-Pluviers. The Perigord Vert is an easily accessible part of the Dordogne being close to the airport in Limoges and the TGV connections to Paris in Angoulême.

The Beaulieu sur Dordogne area is popular with tourists and it boasts a high density of "Les Plus Beaux Villages de France" nearby. Covering the southern half of the Corrèze, the northern half of the Lot, and the eastern side of the Dordogne, this is a region rich in history and the beauty of the region is unsurpassed. Rivers cut through limestone, leaving fantastic cliffs that people have built around and into for thousands of years. The vast system of caves below the earth reveal art in prehistoric painted caves. There are many fabulous Châteaux in the Dordogne Valley as well, with a density similar to the famous Loire castles. Indeed the Dordogne is known as the land of 1001 Châteaux.

Further south, Gascony offers a warm welcome. Unhurried, unspoiled and unceasingly beautiful, this region is one of the best-kept secrets in France. The population density here is appealingly low, while the quality of food and the robust local wines could explain why life expectancy here is the highest in the country. South of the Dordogne, west of Languedoc, north of the Pyrénées and steeped in history, Gascony remains 'far from the madding crowd'. And that is precisely what makes it so attractive. 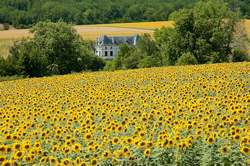 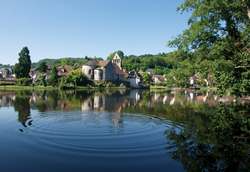 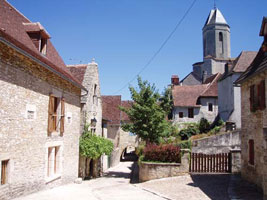