There are a surprising number of tax breaks available to a start-up business in rural areas of France.

Most of this assistance is located in rural development areas of France called Zones de Revitalisation Rurale (ZRR), although they are not restricted to these areas.

The ZRRs are areas characterised by a low density of population, with a population (active or retired) in decline, and a heavy reliance on agriculture as a source of employment.

As can be seen from the following map of these zones, they cover many areas of the country, although they are less in evidence in the North West of the country. 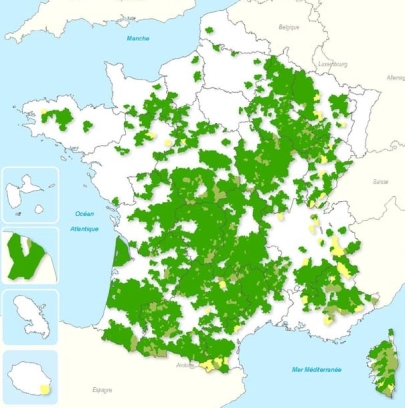 One of the main forms of assistance granted in these areas is an exemption from the French business rates, the taxe professionnelle.

The extent of the exemption depends on the type of business and the decisions of the local, county and regional councils, but in those ZRRcommunes with less than 2000 habitants, all new start-ups with less than 5 employees can get complete exemption for a period of 5 years.

Where the commune has over 2000 inhabitants, the rules are a little more restrictive, but all new artisanal and professional activities are still able to gain exemption.

One slight sting in the tail is that any business that ‘voluntarily’ ceases their activity during the five year exemption period, or in the five succeeding years, is required to repay the tax from which they have been exempted. Anecdotal evidence suggests most business owners get around this little difficulty by simply running the business down when they wish to close it, so that it ceases to be a viable proposition!

In order to obtain exemption, you need to make application to your local centre d’impôts by 1st January following creation of the business.

In relation to income tax there is an exemption for most types of new businesses that elect for the regime réel form of tax status. It is, therefore, not available to business owners who elect for micro-entreprise tax status.

Of course, the one exemption wanted by all new start-ups is from the payment of social security contributions, but, unfortunately, the rules here are less generous.

In order to get some relief from social security contributions, one approach is to register as unemployed with the French employment agency ANPE, prior to establishing the business. Although you will not get any entitlement to unemployment benefit, those on the unemployment register for at least six months get some exemption from the payment of social contributions, which can be available for up to two years. This assistance is available throughout France, not just in ZRRs.

If you are proposing to take on staff, then there is complete exemption from the payment of employer social security contributions for any new employees, for up to 12 months, capped at 150% of the level of the basic wage.

As well as the assistance available at a national level, there is help available directly from the local councils, whom you would need to consult directly. The level and variety of assistance varies from council to council.