French Regions to be Merged

Several regions of France may be merged, as part of a major reorganisation of local government in the country.

President Sarkozy has made no secret of the fact that he considers France had too many levels of government and that some streamlining of the structure was necessary. Last year he, therefore, set up a committee under former Prime Minister Édouard Balladur to come up with some proposals.

The committee have now published their report, which stops short of expressly recommending the expressed wishes of the President.

Instead, their most significant recommendation is to propose a reduction from 22 to 15 in the number of administrative regions in the country.

The main proposals are: 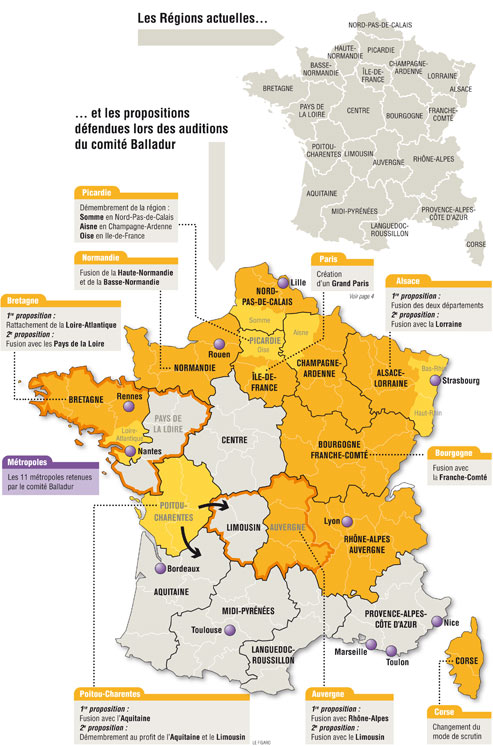 With the possible exception of the re-unification of Normandy, all of these proposals have been greeted with the usual display of opposition and intransigence that accompanies almost any proposal for change in France.

It is clear that the committee was sorely tempted to recommend the abolition of the départements, but they seem to have stepped back from such a step, probably because of the political resistance that such a proposal would face.

Instead, they are proposing that a proportion of the elected members who sit on the departmental councils should also sit on the regional councils. This may be an attempt to abolish the départements by stealth, although it does look a bit like it could add to the administrative confusion.

Some départements would be transferred into another region. Thus, Loire-Atlantique would pass under the tutelage of Brittany. The committee are also suggesting that départements themselves consider voluntary merger.

A new 'Grand Paris' would be created by merging the city with the three adjoining departments of Hauts-de-Seine, Seine-Saint-Denis and Val-de Marne. The merger would create a city of 6 million inhabitants, a threefold increase on the current population.

Outside of Paris, the other eight largest cities in France - Marseilles, Lyon, Lille, Toulouse, Bordeaux, Strasbourg, Nice, and Nantes - would be given unitary authority status, with increased powers and responsibilities taken from the département in which they are located.

Whilst local communes would continue to exist in these new metropoles, they would be denuded of any real administrative role.

Changes to the administrative architecture are to be accompanied by changes to the powers and responsibilities of the various councils.

Crucially, both the regions and the départements will lose their general power to act in such domains as they deem to be necessary in the general interest of their communities. Instead, they will each have prescribed powers and responsibilities.

The recommendation is a very significant one, for the lack of any clear limits on what the councils can do has been the cause of a great deal of confusion amongst inhabitants, and dispute between the various levels of local government.

There are those who also consider it leads to higher levels of public spending than would otherwise be necessary.

Whilst the primary role of the regions would be economic development, land planning, transport and education, the departments would be primarily responsible for social services.

At the lowest tier of local government, that of the commune, there are no dramatic recommendations, but once again it is clear the committee favoured some rationalisation of the existing structure.

Accordingly, they propose that increased financial incentives be used to reinforce existing inter-communal collaboration, and for elected members who serve on the inter-communal bodies to be directly elected.

It remains to be seen whether any of these ideas ever see the light of day, as the committee struck a very voluntarist chord concerning implementation of the proposals. Nothing, it seems, should be imposed upon recalcitrant councils or communities, who should decide for themselves whether they should change.

In their first reaction to the report, the government has also shown a similar timidity, with reassurances that nothing was going to be decided quickly, or against the overwhelming wishes of the local councils, or those who live in the affected areas.

As it is unlikely that any of the councils proposed for abolition are going to be willing to commit 'hari kari', it is unclear if the proposals will ever be implemented!