‘France is in a situation of crisis over the drought’, says the French Minister of Environment.

According to the Minister, Nathalie Kosciusko-Morizet, the month of April was exceptionally hot and dry, with rainfall levels at 29% of those normally expected at this time of year.

The dry hot spell has continued into May, and the Minister forecasts that it will continue at least for the foreseeable future.

The level of rainfall was also lower than normal between September 2010 and March 2011, leading to concern about the state of around two thirds of the reservoirs.

Observers are saying that the drought is the worst that has been seen since the 1950s.

'The situation currently is one we would normally observe in July', stated Michel Schneider of Météo France.

As a result, the weather conditions have become particularly critical for the farming community, who account for around 80% of the consumption of the water supply over the summer.

There are now 28 departments where water restrictions are in place for most users. In a lot of cases these departments are at the highest level of alert concerning water shortages. Other departments may shortly be added to the list.

The restrictions vary by department, but details should be available from the local mairie.

Nevertheless, in several departments, under pressure from farmers the restrictions have been lifted, or they are simply not being enforced, and there is concern among some observers about the water supply in these departments for the summer period. 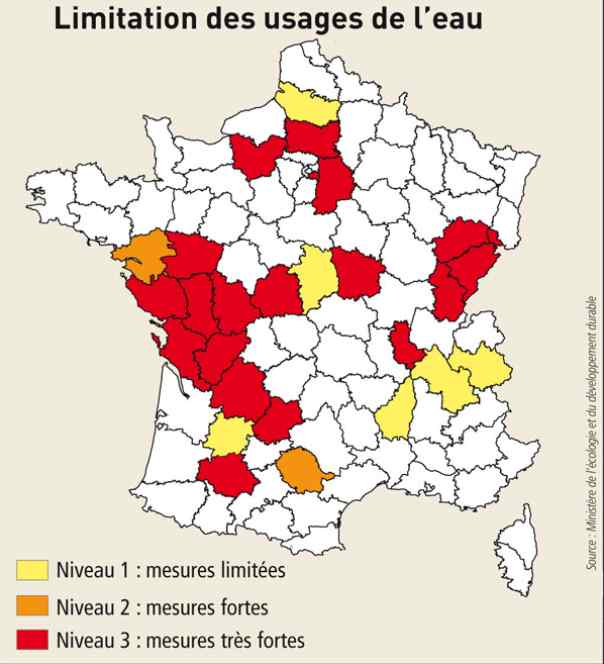 There is also concern about the situation at several nuclear power stations, where the drought brings the possible risk over the summer that some power stations may need to be halted, due to an inability to ensure proper cooling of the reactors.

L'Observatoire du nucléaire, an independent anti-nuclear body that monitors nuclear industry in France claims that only 14 of the 58 reactors can be assured of functioning over the summer. All of these reactors are those located near the sea, rather than a river.

The Minister has stated that she is being 'particularly attentive' about the operation of the nuclear power stations at the present time.

France recently had to call upon assistance from Switzerland to guarantee sufficient electricity supply in the north of the country, a situation that does sometimes occur, but 'one that does illustrate that the season is premature', said the Minister.