A new study shows that parts of the low lying Atlantic coastline of France are slowly but surely being engulfed by the sea.

According to the Observatoire de la Côte Aquitaine, by 2020 34 kilometres of the sandy coastline of the Aquitaine coast is at risk of retreating by more than 2 metres a year, while a further 79 kilometres will be lost by an average of 2 metres a year.

By 2040, say the authors, 150 kilometres of the coastline will be affected by a strong risk of receding by more than 2 metres a year.

Contrary to what may be perceived wisdom, the main cause of the erosion is less rising sea levels from global warming but the lack of sand and sediment deposits on beaches.

The study says that other factors at play include the nature of the currents that swirl around this coastline and the increasingly frequent and violent storms.

They also include the intervention of mankind through the creation of ports and harbours, and the extraction of sand and other sediments to create sea defences.

The phenomenon is, of course, thousands of years old, and it is happening around the globe. But it is a process that has been accelerating and is impacting substantially on some communes along the Atlantic coastline.

The main departments affected by the phenomenon are the Pyrénées-Atlantiques, Landes, Gironde and Charente-Maritime.

Although clearly of concern, the study says that the average figures need to be treated with caution, for the erosion is episodic, depending to a large extent on the energy and nature of the sea swell, which varies substantially one year from the other. So the same beach may remain stable for several years, only to recede substantially in a single year.

The areas affected are primarily natural forests areas, but they also include habitable, leisure and tourist areas.

A stark illustration of the level of coastal erosion are the increasing number of beach gun emplacements constructed by the Nazis during WW11 to defend against attack from the UK that are falling victim to the tides and shifting sands.

In a small number of cases the land mass is actually increasing.

Many areas of the Landes are also protected from the dune system that has been constructed, and behind that the forest, which will protect many areas for decades to come.

The storm Xyanthia that struck the coastline in February 2010 causing 59 deaths and around €1 billion in damage has accelerated the sense of urgency that politicians and planners now have about trying to develop stronger policies and actions to defend the coastline.

A great deal of action is already taking place, including strict control of new building, sustainable tourism, construction of breakwaters, and works of consolidation and reinforcement of the dune system.

In a small number of cases local authorities are also having to consider the rehousing of the inhabitants.

One of the worst affected areas is Soulac-sur-Mer in the Gironde, a small town of 2,800 inhabitants (20 times larger in summer), where a block of 78 apartments built in the 1960s is now only 20 metres from falling off the edge of the cliff. It was 200 metres distant at the time of construction. Recently, 10 metres of the cliff disappeared into the sea.

The following graphics show the level of risk of erosion up to 2020 and to 2040. 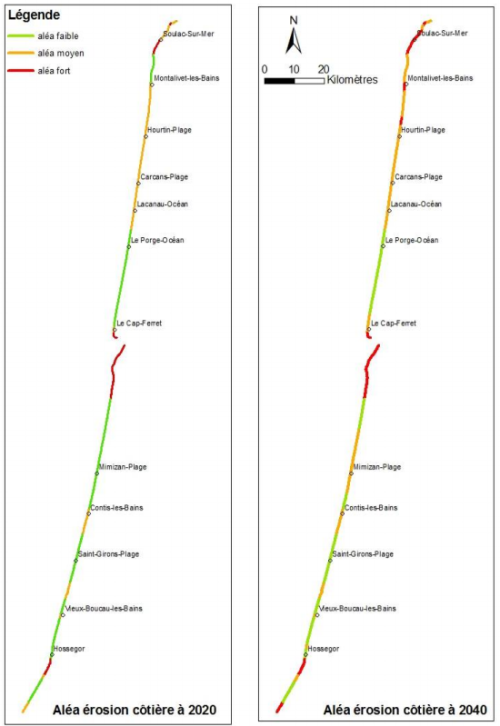 It is not only the sandy beaches of the Atlantic coast that are affected, for some areas of the rocky cliffs of the Basque region area also disappearing into the sea.

Around 40 kilometres of the Côte Basque (Anglet to Hendaye) is also affected by erosion. According to the study, it is receding by an average of 20 centimetres a year, with some houses having already disappeared into the sea.

However, in some areas it is as high as 50 centimetres a year, such as in the bay of Erromardie at Saint-Jean-de-Luz.

According to the Observatoire, around 17% of the Basque coast is affected by a receding line greater or equal to 20 centimetres a year (6.3 km out of 36.7 km).

The main cause of the problem is the level of rainfall in this part of the coast, which over thousands of years has been weakening the rock, making it more fragile and unstable. The effects from sea swell and currents have also contributed to this phenomenon.

By 2020 experts consider that 20 kilometres of the coast will be subject to 'average' to 'strong' erosion, and by 2040 150 properties will be directly affected by receding cliff faces.