What are the shooting rights of hunters in France on private land?

Reports of chasseurs in France running amok over private land in their quest for game are not uncommon, although the fear of such intrusions far exceeds the actual number of such incidents.

When it does occur, it is frequently not the result of hunters exercising their inalienable rights to hunt on private land, but more often an abuse of their rights in a feverous attempt to capture their prey, generally either deer or wild boar. With the loss of hedgerows and wild habitat in France as a result of intensive agricultural practices, shooting of game birds (partridge and pheasant) has become less common.

As the number of natural spaces for hunters to pursue their activity is in decline, so it is inevitable that the risk of intrusion increases, as does the risk of accidents.

So just what are their rights?

The starting point is Article L422-1 of the Code de l’environment, which states that a hunter does not have the right to enter onto private land without the consent of the owner:

However, that fundamental expression of property rights is not absolute, for in 1964, as a result of a law promoted by parliamentarian and hunting enthusiast Fernand Verdeille, the ‘loi Verdeille’ was passed, which granted a right for hunters to go on to private land.

The loi Verdeille created local associations, called Associations (Inter) Communales de Chasse Agréées (ACCA or AICA), whose responsibility it is to ensure hunting is properly managed in those areas under their control, including, since 2012, protection of the environment. They are regulated by the local prefet and operate on a five-year cycle.

The graphic below shows the red those departments where an ACCA is obligatory and in orange where they are discretionary. The geographic area of each department covered by an ACCA varies enormously, from 99% in some departements to a under 1% in others. 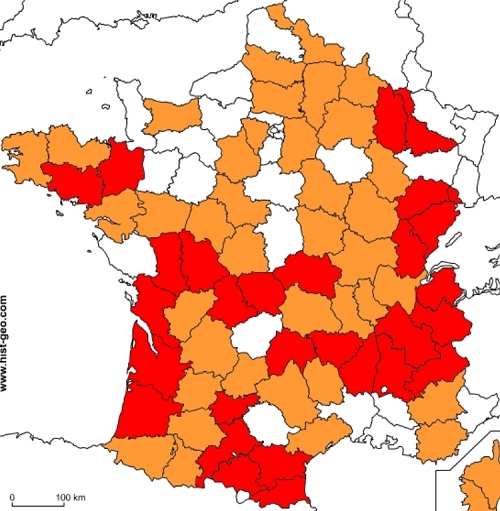 The role of the ACCA in controlling big game (deer and wild boar) is questionable, for their numbers have increased, causing significant damage to crops, but which of course continues to provide a raison d'être for hunting.

Where these associations were established any landowner with less than 20 hectares of land in a single block is automatically affiliated to their local ACCA and obliged to allow hunters to hunt on their land, without their prior agreement.

The 20-hectare threshold is higher in some departments, and is 100 hectares in mountain areas. Landowners with landholdings above the thresholds can be excluded from the ACCA on express demand. They are provided with the opportunity to be outside of the ACCA as the law assumes that they are in a position themselves to undertake proper management of wildlife.

Although this 150 metre is often cited as a general rule, in fact it only applies in ACCA controlled areas. Outside of an ACCA zone local municipal or prefectural byelaws apply, which may differ by department. The local shooting associations will also have internal rules that fix shooting distances.

In addition, also excluded is land that is completely fenced, provided the enclosure is 'continue et constante'. Unfortunately, one of the adverse consequences of allowing owners to fence off their land to escape the hunt has been that many animals have become fence victims. Indeed, some local hunt associations fence off land to enclose wild animals, which they later hunt.

Not surprisingly, over the years there has been uproar in France about the rights granted to hunters, which culminated in a legal action in the European Court of Justice in 2000, when the court ruled that that the law violated the freedom of conscience and lifestyle, the freedom of association (the freedom not to join a group), and the right of ownership of one's property.

As a result, the government was obliged to pass a law weakening the provisions of the loi Verdeille, allowing property owners to have their property excluded from the ACCA. They are able to do so ‘au nom de convictions personnelles’. There is no need to provide justification for your decision.

However, the procedure to do so is not easy, for it is only possible within six months of the five-year anniversary date of the ACCA. Your local mairie should have details; if not the local service de chasse in the prefecture or on their website.

The procedure requires that you send a recorded delivery letter (lettre recommandé avec accusé de réception) to the president of the Fédération départementale des chasseurs in your department asking that your land be withdrawn from the ACCA area. In some departments there are forms available provided by the prefecture.

You need to submit:

Once received you then need to place signs 'chasse interdite' on your land, and to undertake yourself not to hunt. Excluding your land from an ACCA does not exempt you from the obligation to ensure that wild animals do not cause damage to crops.

Contrary to popular belief a réserve de chasse is similarly land where a hunt cannot take place. This may be land which has been set aside by an ACCA for protection, as they are obliged in law to designate at least 10% of their area in this manner. Cynically, they are very often areas where they cannot in any event hunt (football field), or which are not suitable for hunting. It may, therefore, be possible for you to ask your local ACCA to include your land in a réserve de chasse, particularly if the anniversary date for making an application to be excluded is not imminent.

Outside of areas where there is no ACCA there are merely société de chasse that operate, which have no regulatory role, and the hunters have no right to hunt on your land, but if you wish to affirm that more clearly, then you should write to the Président of the société de chasse stating you do not want hunters on your land. Copy to the mayor and the ONCFS (Office national de la chasse et de la faune sauvage).

Alternatively, if you wish to give greater credibility to your position, you create a sanctuary (refuge) for wild animals and fauna, which can be accomplished via ASPAS (Association pour la protection des animaux sauvages).

Finally, even if you have taken all of the steps necessary to prevent hunting on your land, the law still permits dogs to go over your land if they are chasing game from adjoining land.

Article R. 428-1-II of the Code de l’environnement states: 'le passage des chiens courants sur la propriété d’autrui ne peut être considéré comme une infraction lorsque ces chiens sont à la suite d’un gibier lancé sur la propriété de leur maître.' Case law has, however, ruled that the person responsible for the hunt must justify that they did everything in their power to prevent the pursuit of dogs on the property. In addition, if damage is caused, you have entitlement to claim compensation.

The courts have also determined that there is a right of pursuit of mortally wounded game, but the pursuit of a wounded animal on the property of another is an offence under the Code de l’environnement, a subtle distinction that is likely, in practice, to be of little value.