Buyers have a legal right to compensation for errors occurring as part of the 'diagnostics immobilier', but on what basis?

As part of the sale process of a property in France, the seller is required to provide to the buyer several obligatory statutory surveys and reports on the condition of the property.

These surveys are known as the Dossier de Diagnostic Technique (DDT).

Their cost of the dossier depends on the number of reports required and size of property, but it will be a minimum of several hundred euros, and up to several thousand euros for a substantial property.

The surveys are undertaken by professional 'diagnostiqueurs immobiliers', technicians who have received specialist training in the surveys, and who are also required to hold professional indemnity insurance.

The number and nature of these surveys depends on the age, type and location of property, but in designated areas of the country it includes a survey for termite infestation.

The problem of termites is widespread in France, although it is most severe in the South West. 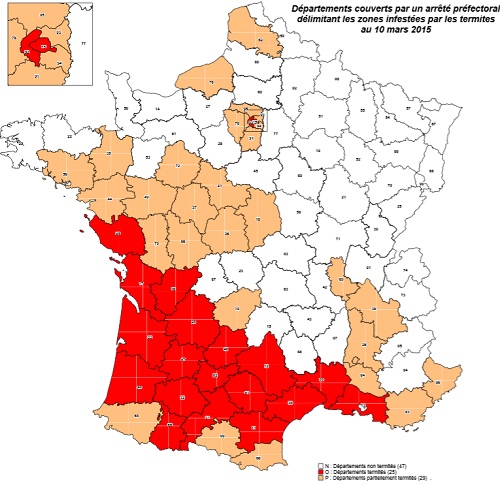 The cost of remedying a termite infestation is substantial. Not only will you pay thousands of euros for the treatment itself, but there is also the cost of repair, removal and replacement of the affected timber.

The treatment can be done on a DIY basis, but as it requires injection into main timbers and walls (spraying is not sufficient), without a proper understanding of what you are doing there is no guarantee it will be successful.

The quality of these reports is of a generally high standard, and anyone who has been through the sale and process purchase will be able to attest to the sheer volume of information that is produced.

However, errors do sometimes occur, which can be most serious where the technician has failed to properly pick up on the presence of termites in the property.

Where a technician has been found to have been professionally negligent French courts have made divergent judgements on the nature of the compensation to the seller.

In some cases the seller has been merely compensated for the loss of the opportunity to have purchased as a lower price; in several cases the sale itself has been annulled; in other cases the compensation has been limited to treatment being carried out; in yet other cases the surveyor firm has been required to pay for timber treatment, remedial works and damages to the buyer.

The issue of the nature and level of the award becomes particularly difficult where, although the surveyor has found no current activity, they cite evidence of past infestation. If subsequently a re-infestation occurs, what is the liability of the surveyor?

That question arose recently with a buyer who had acquired a property for renovation and later found that it was infested with termites.

In the survey report that had been carried out the technician had mentioned traces of termites infestation from the past, without the current presence of termites, but concluding that it was impossible to exclude the possibility that there might be a re-infestation.

When the case reached the court of appeal the judges took the view that the damages payable to the buyer should be limited to the cost of new termite treatment. In coming to their decision they stated that the buyer was aware they had purchased in an area prone to termites, and that they had been informed of the past infestation and the risk that it might occur again in the future.

The purchaser appealed the decision to the Supreme Court, the Cour de Cassation, who ruled that in stating there was no termite infestation in the property the technician provided a guarantee against the risk, stating:

Accordingly, they ruled that the survey company was obliged to pay for termite treatment, remedial works, and damages to the buyer.

The decision of the court has caused a great deal of consternation among estate agents and survey firms, with many arguing that in deliberately accepting the risk the buyer should have held some responsibility and be granted a lower level of compensation.

If the principle of a 'guarantee against risk' is adopted in the future by the courts then insurance premiums will arise, which will inevitably have to be passed on to the public in higher prices for the survey reports.

However, courts always have a habit of nuancing cases, so we may well expect that this will not be the final word on the issue.