House prices in France rose last year by 7.1%, according to the annual review of the market carried out by the French estate agents professional body, FNAIM. The increase was the lowest for several years and, over the two year period 2005/6, prices have risen at half the rate of the years 2003 and 2004.

The FNAIM 2006 figure is slightly lower than separate studies published recently by the French Notaires and the national estate agents 'Century 21', who both considered that French house prices had risen by about 8%.

French house prices actually decreased marginally in December and the rises were lower in the second part of the year than during the first six months.

The following table shows the pattern of price rises by region of France and type of property for the past three years. As will be seen, it is apartments that have seen the greatest rises, but they are now seeing the biggest falls.

FNAIM report that the average price per square metre for houses (excluding flats) is now €2161. However, there are big disparities by region.

An analysis of current average price per m² of houses by French region is given below. Needless to say, you should treat these figures as a rough guide only, as prices will vary by type, size, condition and location of property. 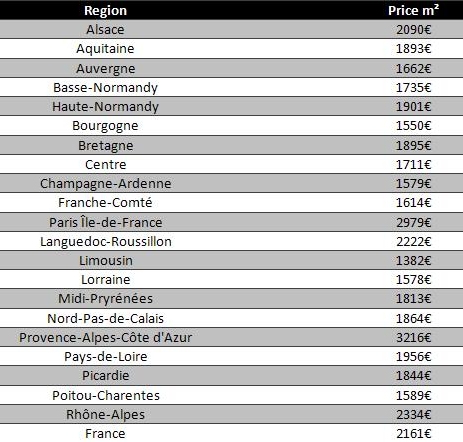 In terms of outlook, FNAIM believe that prices will rise by 3.5% to 5% during 2007, a forecast that is more optimistic than others published recently, which suggest either no increase at all, or a drop in house prices.

One of the most pessimistic forecasts has come from the economic consultants Xerfi, who consider that property prices will go down by up to 25% over the next four years. They believe prices will drop by 2% in 2007, with larger falls in 2008 and 2009, and a return to more stable conditions in 2010.

Their view is based on an historical review of the French housing market, in which they consider double digit price growth since 1999 has substantially outstripped the growth in household incomes, necessitating the need for a 'price correction' to take place.

The Xerfi analysis also draws on a recent report from the OECD, which points to the 'globalisation' of the housing market, and underlines the mismatch between incomes and house prices that has occurred throughout most of the developed world.

By contrast, FNAIM argue that a softer landing is in prospect, due in large measure to the generally favourable credit conditions that exist, with continuing low rates of interest and an increase in the duration of the mortgage period being granted by lenders.

In addition, demand for French housing continues to be strong, supported by a positive economic outlook, a strong demographic, and manageable levels of household credit.

This final point illustrates the stark difference in the attitude towards debt between the French and many other countries. In France the level of household debt to income is 66%, whilst in the UK it is 145%, and in the Netherlands a staggering 217%!