House prices in France continue to remain stable, with prices even falling slightly in the South West, according to the latest housing market survey by FNAIM, the professional body of French estate agents.

In their latest survey for the period ending June 07, FNAIM report that prices rose by 2% in second quarter of the year, giving an increase over the past year of around 5%.

A similar picture is reported by property listings magazine De Particulier à Particulier (PAP) who state that prices have largely remained stagnant since the beginning of the year. Their own analysis covers sales of property in the eight largest cities of France, so country properties are not covered in the survey.

At a regional level the picture from FNAIM is more diverse, as can be seen from the following table, which shows price changes for the twelve month period ending 30 June 07. 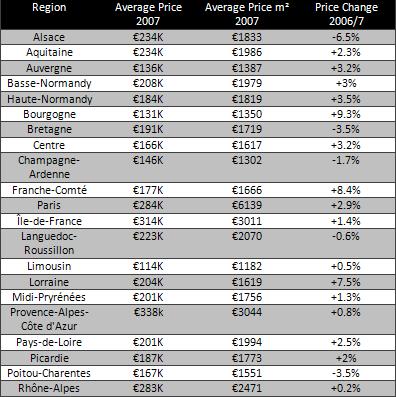 It is clear then that, thus far, there has been no rebound in the market arising from the election of the new President, who has announced new tax breaks for mortgages.

It may well be that buyers remain to be convinced of the measure, or that the large number of properties on the market is simply providing buyers with the opportunity to negotiate on the price.

The rises in interest rates over the past year may also be having a moderating effect. Current rates in France are now around 4.5%, excluding compulsory life insurance.

Of perhaps greater impact has been the massive house-building programme in France, with particularly large programmes in Brittany and Provence. The government has recently reaffirmed a commitment to building 500,000 homes a year, which, if realised, is bound to continue to dampen any price growth.