The British may be the largest group of international buyers of French property, but the Belgian share is growing and the Scandinavians spend most.

Purchases by non-resident UK nationals accounted for nearly one-third of purchases by international buyers of property in France last year.

The share has remained fairly constant in the past few years, albeit down from the halcyon days of 2004/2007, when they accounted for around 40% of the market.

In second place are Belgian nationals, who last year accounted for nearly 19% of all such sales, up from an average of 12% for the period 2006/16.

No other country has a percentage share greater than 7%. The Italian share of the market has fallen from 22% in 2009 to 5% last year.

Total sales to non-resident international buyers last year was 17,556, up slightly from 2017.

Although many of the purchases by Belgian nationals are work related cross-border properties located in the north of France, 21% of their purchases last year were in the Occitanie region of France and 18% in Provence-Alpes-Côte d'Azur (PACA).

Indeed, in PACA they are the largest group of international buyers, notably in Vaucluse (41%), Alpes-Haute-de-Provence (36%), and Var (28%).

The Hauts-de France, the region nearest Belgium, accounted for 16% of their purchases.

In contrast, purchases by Dutch nationals is firmly rooted in south of the Loire, with most purchases in PACA (21%), followed by Nouvelle Aquitaine (18%) and Occitanie (14%).

Although they only account for 1% of all non-resident international sales, the Norwegians are by a country mile the biggest spenders, splashing out average of €611K for their French idyll.

Indeed, Scandinavians took the first three places in the league table of expenditure, with the Swedes coming in second at an average of €501K and the Danish in third place at €429K.

The average spend by British buyers was €234K. 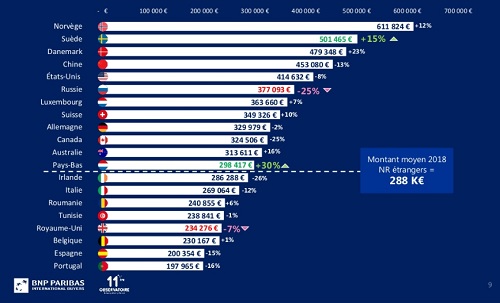