The French Ministry of Agriculture has recently published figures on agricultural land prices throughout France, which show an average price of €4390 per hectare for arable land, and €3100 per hectare for grassland.

Highest land price is to be found in the départements of Bouches de Rhône (€11,700) and the Alps Maritime (€8890), driven in large measure by a shortage of suitable land, whilst you can buy for as little as €1490 per hectare in the Loire Atlantique.

Areas under more intensive arable production, such as those around the Paris Basin, show the highest general prices, whilst they are lower in those areas where livestock farming is dominant, such as Burgundy, France-Comte, Loire and Limousin.

On average, prices grew by around 3% last year, although they actually went down in Haute-Corse, Orne, Aisne, Loire et Cher, Vosges, Eure et Loire, Puy-de-Dôme and the Pyrénées-Orientales.

Once inflation is taken into account land agricultural land prices are almost half of what they were in 1970.

The following table shows, by region, the average price paid for arable land and grassland in 2006. 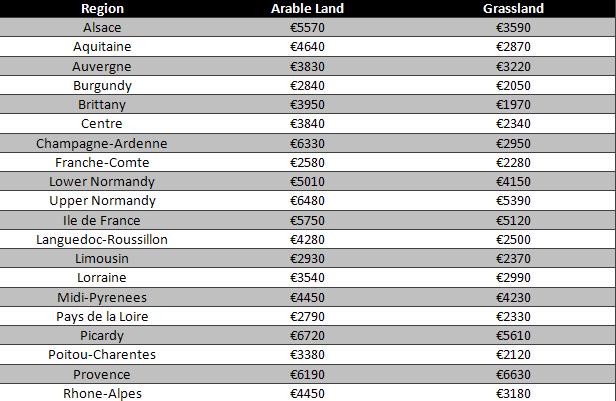 The average price per hectare for an appellation contrôlée vineyard was €79,580, and for all other vineyards it was a more modest €12,020 per hectare.

Nevertheless, prices are not on a downward trend everywhere. The price of vineyards in Alsace, Beaujolais, Languedoc and the South West (excepting major Bordeaux vineyards) may well be in freefall, but they went up in Burgundy, Jura, Provence and the Val de Loire.