The Price of Building Land in France

The price of building land in France averaged €67m² in 2006, but varied from €17m² in Limousin to €245m² in the Paris region, according to a recent report published by the French Government.

The study examined 178,000 individual dwelling planning permissions granted in 2006 in France, to establish the price at which the land was sold, and the cost of construction of the dwelling.

Accordingly, the average total investment cost for the land and dwelling was €192,724, in which the land accounted for around 30% of that total cost.

Nevertheless, these averages hide very significant regional differences, as the table below demonstrates. 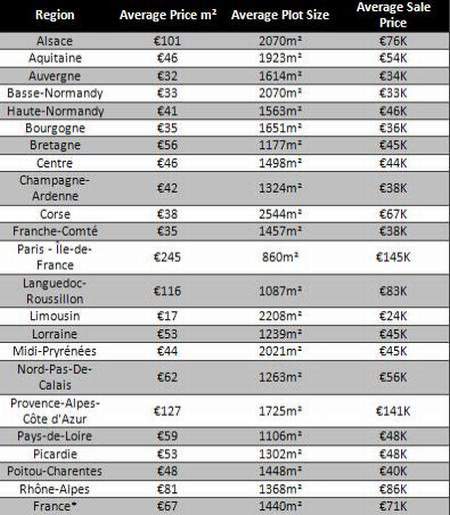 The study showed that if you were able and prepared to self-build then the construction costs were €720m², whilst the use of an architect sent these costs up to €1115m². If the builder was in control of the whole process, then the average cost of construction was €957m².

As always with these studies we emphasis the need to be careful with ‘average’ figures. They can only give you an approximation of prices and costs. Neither can the figures say anything about the quality of the final product!

Exposure to Climate Risk in France