Housing Market at a Turning Point

House prices have fallen by 3% over the past four years, according to FNAIM, and it looks as though it will deepen in 2012.

In their latest review of the housing market, FNAIM, the national association of French estate agents, undertook something of a retrospective analysis of the performance of the market over the past decade.

Their report shows that house prices rose by an average of 85% between 2000 and 2007, before falling back over the past four years.

As can be seen from the graphic below, it is a market that moves along at different speeds, with large variations across the country.

In only two regions - Languedoc-Roussillon and Provence-Alpes-Côte d’Azur - did prices double in the seven year period between 2000 and 2007.

In some regions the increase in prices has been surprisingly modest, with the housing market in Alsace and in Lorraine having gained less than 50%.

Although the market for apartments shows similar geographic variations, it was considerably more buoyant, rising by an average of 115%, with the South East and South West leading the way.

The figures have not been corrected for inflation, which over the seven year period amounted to 15%. 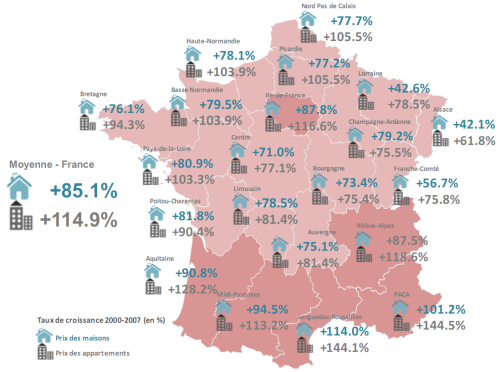 Two regions have continued to see positive growth, with Nord-Pas-de-Calais seeing a rise of 6.7% and Upper Normandy nudging 1.5%.

Elsewhere prices have either fallen or have been stable at a regional level, although with more local variations.

The following graphic shows the price changes in each region for houses and apartments for the period 2007-2011. 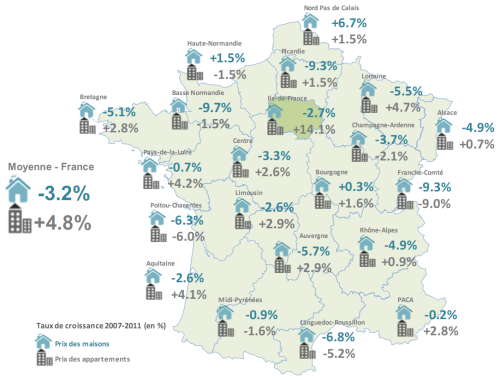 Despite the overall fall in prices between 2007-11, against the expectations of many, there was strong sales and house price growth in 2011.

Although final figures are awaited it looks as though it was a record year for the level of activity, with total sales (apartments and houses) likely to have exceeded 850,000 for the year. The previous highest level of sales was in 2006, when they hit 837,000.

House prices in the regions also followed suit, rising by an average of 6.1%, according to FNAIM.

The agents explain the price growth in 2011 mainly as a consequence of historically low interest rates and a bounce back from three previous lacklustre years, when house prices fell or remained unchanged. In 2008 prices fell by 4.9% with a similar fall in 2009 (-5%), while in 2010 prices remained relatively static (+0.6%).

It is much the same script from the French notaires. Although they report a lower annual figure of 3.8% for the period ending September 2011 (their 4th Qtr results are not yet available), both the estate agents and the notaires are agreed that much of this price growth has been in the main cities rather than rural properties or smaller towns.

Once a wider lens is used, covering whole departments and regions, then a far more asymmetric picture emerges.

However, as neither the agents or the notaires give any more than a partial geographic breakdown we remain in the dark about a more disaggregated analysis of price movements, particularly for country properties.

Some additional light is cast on the performance of the provincial market last year by national estate agents Century 21, who in their own recent review observed large price increases in Val-de-Marne (+12,3%), Poitou-Charentes (+10,4%) and Rhône-Alpes (+9,9%).

In most cases the price increases were no more than 5%.

The notaires also point to some significant variations in the market, with 10 departments showing the average transaction value in houses rising in excess of 10% in the year to September 2011, notably the Gers (+19,4%), Haute-Savoie (+12,6%) and Loire-Atlantique (+10%)

What is clear then from all three reviews is that there are large variations in the market between areas and types of property.

As if to set a trajectory for 2012, both the FNAIM and the notaires point out most of the prices growth occurred in the first half of the year, with prices and sales having either stagnated or fallen back in second half, a view echoed by Century 21 in their review.

FNAIM note that ''despite appearances to the contrary, the increase in prices observed in 2011 was not euphoric, and should not mask price tensions observed since autumn''.

Given the economic and financial crisis, it is not surprising that there is evidence of a deceleration in the housing market, and probably the only question that remains outstanding is just how far it will fall.

There are many economists who believe that the 'correction' could be quite substantial, as over the past decade property prices have substantially outstripped the growth in incomes.

By way of evidence they frequently site the famous 'tunnel de Friggit', named after a senior government statistician Jacques Friggit, who in graphic form publishes a regular analysis of the long-term relationship between household incomes and property prices.

As can be seen from the graph below, during the period 1965 to 2000, household incomes and property prices remained in phase with one another. However, with the dizzying growth in property index since 2000, prices have gone from an average of three to five times household income, so that it has become much more difficult for households to now buy property.

His view, which is shared by a other economists, is that prices now need to fall by up to 35% to bring them back into the 'tunnel'.

There are also a number of more prosaic reasons for thinking that prices could fall substantially in 2012, most notably because of three tax changes that have been introduced in the past year that could well have a significant impact on the market. They are:

With the loss of its triple A bond credit rating, and with the need for banks to repair their balance sheets, mortgage borrowing costs will also be higher this year. Indeed, interest rates have already started to push up in recent months.

Leading French mortgage brokers International Private Finance Ltd are reporting that the banks are being more selective, with fewer being prepared to offer loans for 30 years, and demanding that applicants bring a deposit of at least 10% to the table, and often 20% in order to obtain the best rates.

There is also a strong political dimension to the outlook for this year, with the presidential elections in April and May, when such occasions have normally been marked by a more cautious ‘wait and see’ attitude in France amongst investors and house buyers.

Clearly, the economic outlook for 2012 is not good, with the future of the eurozone itself at stake.

As the notaires state: ''The housing market is probably at a turning point, ending a long decade that began in 2000, marked by the dynamism of all markets. We have to face the facts; international and national macroeconomic data will to bring an end to this momentum."

However, assuming the worst scenarios do not materialise, few observers believe there will be a major collapse in the market, primarily due to:

And there remains the unquantifiable psychological dimension to all of this. In a period of uncertainty and instability housing may well continue to be seen as a safe haven refuge for many households.

Last year the CAC 40 fell by 16%, gross returns on bank savings accounts were only around 2% and returns from assurance-vie policies also fell. Meanwhile property prices rose by 6%.

In the end, therefore, the outlook for the market will rest not only with underlying fundamentals, but with our responses to them.