The French rural land agency SAFER have produced a useful analysis of the price of country property in France and the most popular areas for international buyers.

They are able to do so by virtue of their right of pre-emption on most rural properties, granting them a right to formal notification by notaires of relevant sale contracts. They are also themselves active in the market.

Their assessment in the past two years has been substantially aided by changes in the law introduced in 2014, which requires notaires to notify to them a far higher number of properties subject to sale, providing a more accurate picture of the market.

Overall, SAFER state that the national average price of a 'maison de campagne' in 2016 was €160,400, a figure that is broadly in line with 2015, but substantially down on the peak of 2007, when the average price was €220,000. However, as the number of transactions recorded by SAFER at this time was much smaller it is not an entirely reliable comparison.

Of potential interest to many international owners and buyers is the analysis they provide of rural house prices for each department of France. SAFER are the only body to provide such information; the property market reports from the notaires and French estate agents are drawn mainly from transactions in urban areas, an entirely different market to that for country properties.

The study shows that there are no less than 12 departments with average prices less than €100,000. The department with the least expensive average rural house prices is Creuse, in the region of Nouvelle Aquitaine, with an average sale price of €63,500.

The full list of under €100K departments is as follows:

Nevertheless, the table below also shows that cheap property can be found right across the country, with minimum prices starting from as low as €15,000 (Isère and Indre). Such sales are likely to be far and few between, and just what you get for your money for €15K is going to differ markedly from one department to the next, but it is significant that the starting price of property is modest throughout most of France.

This same information is presented cartographically below.

As can be seen, the least expensive areas are Central and North East France, the Pyrénées and Brittany, as well as parts of some other regions. Highest prices are around the Parisian Basin, Alsace, Haute-Savoie, the Mediterranean coast, the Atlantic coast, and the cities of Lyon, Toulouse and Bordeaux.

The main reason for the fall in the number of international buyers last year was mainly due to fewer buyers from the United Kingdom, the result of Brexit and the fall in the value of Sterling.

Neverthless, British buyers accounted for 47% of all international buyers (53% in 2015). They are followed by the Belgians and Dutch.

As can be seen, international buyers are continuing to buy in those places where they have done so in the past, with most sales in the Central West of the country and also parts of Midi-Pyrénées, Burgundy and Languedoc-Roussillon. 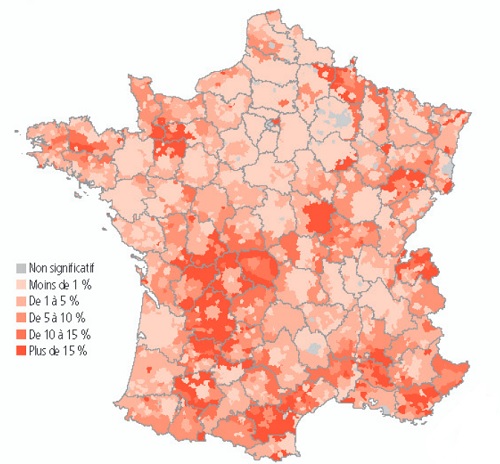 The table and images courtesy of Terres d’Europe-Scafr d’après Safer.