Price of Fruit and Vegetables in France 2019

A comparison of fruit and vegetable prices in France shows big differences between different stores and the markets. 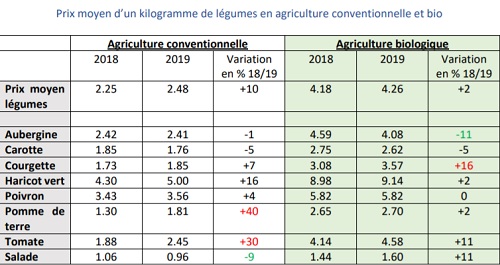 Low-cost supermarket remain the most competitive on price, around 20% cheaper than markets and 18% less than super/hypermarkets.

According to the authors, to eat 5 fresh fruits and vegetables/day, a family of 4 people (2 adults and 2 children) would need to spend between €117 and €222 a month.

The study considered that whilst organic farming was on the rise it remained difficult to access for those on modest budgets. On average, the organic basket was nearly twice as expensive as its conventional counterpart.

The graphic below show the trend in prices for a kilo basket of fruit and vegetables, for inorganic and organic produce over the period 2010 to 2019.

Driving in France - Licence and Insurance