As economic data in the UK improved, whilst that from the eurozone remained mixed, Sterling continued to push higher against the euro, says Ben Scott.

An initial GBP/EUR low of €1.1715 (Interbank throughout) as illustrated by Point A on the graph below, was followed by a period of gradual increase which resulted in an 8 month high of 1.1988 on 30th September, trading at an average rate of €1.1865 throughout September. 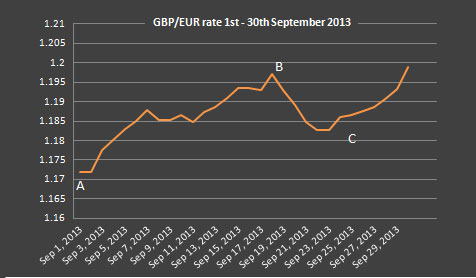 Sterling gained traction at the start of September as positive economic sentiment grew on a combination of data including improving housing market data, manufacturing and construction figures and significantly better than expected service sector figures, which accounts for 75% of economic output from the UK, and reached the highest level for over six years.

The economic improvement was validated by the Organisation for Economic Co-operation and Development (OECD), raising the UK growth forecast for 2013 from 0.8% to 1.5%, representing an impressive turnaround from an economy which stood on the brink of a triple dip recession at the start of 2013.

Sterling gains from the start of September, through to point B, came despite improving economic data from the eurozone, which points to further growth and stability. However, the eurozone data was offset by comments from German politician, Wolfgang Schauble that "Greece may need additional aid" and speculation of further interest rate cuts form the European Central Bank (ECB).

Sterling's sharp decline from point B was a consequence of poor retail sales figures, with the biggest sector decline for 10 months, bringing caution back into the UK economy, whilst adding to the argument that Sterling's assent may not be sustainable.

Positive Sterling gains were quickly re-established from point C, and further supported by Bank of England Governor (BOE), Mark Carney, who gave an unusually candid interview to a local newspaper, 'The Yorkshire Post', where he admitted that, in his personal view "given the recovery has strengthened and broadened, I don't see a case for quantitative easing". This was very positive for Sterling as quantitative easing (QE) has always had a negative impact on the currency.

Whilst there is undoubtedly a newfound transparency from the BOE under Governor Mark Carney, which should benefit Sterling going forward, it may not prove enough to sustain GBP/EUR at current levels, especially as business and consumer confidence returns to the European markets following the re-election of Chancellor Angela Merkel, providing stability to the German economy which remains the economic powerhouse of Europe.

Numerous factors will determine the immediate direction of GBP/EUR rates.

Whilst the UK’s short-term economic outlook improves, concerns grow surrounding the sustainability of the economic recovery on the back of fears of another potential UK housing bubble. With Vince Cable’s warning that "history is repeating itself", the trepidation will surely be exacerbated by the Government's extended 'Help to Buy Scheme'.

Despite this sentiment surrounding the UK economy appears to be improving even though forecasts are of economic consolidation rather than growth. Several Bank of England Monetary Policy Committee members have retracted previous calls for further monetary stimulus based on recent economic improvements, including BOE member, David Miles, who, having previously advocated further QE, now claims the UK is "heading into a self-sustained recovery". This bodes well for the pound.

In spite of positive remarks from former ECB President, Jean Claude Trichet, who claimed "Europe is halfway to a recovery" (an opinion supported by reports indicating eurozone sentiment had turned positive for the first time in over two years), there are undoubtedly further tests ahead for both the euro and euro zone. The next tranche of Greece's bailout, due in October, is set to provide the next test to recent eurozone stability.

Eurozone data shows factory activity has now picked up at the fastest rate in over two years, whilst German ZEW (Europe indicator of economic sentiment) for September drastically outperformed forecasts, with ZEW's President, Clemens Fuest, declaring that the "German economy is still gaining momentum and the outlook has improved due to a better EU area outlook". Economic sentiment in Germany has now reached the highest level since April 2010, increasing the potential for euro strength going forward.

Political uncertainty has proved detrimental to the euro in recent years so the re-election of Chancellor Angela Merkel will provide stability to the euro. With Angela Merkel being seen as a symbol of austerity, the future for the euro looks assured, yet further painful cuts for struggling peripheral European nations remains a very real probability.

Next Article: Equestrian Properties For Sale