French taxpayers are to benefit from a reduction in income tax this year, although the news has not been greeted with unbounded joy by everyone.

The measure was included in a range of handouts designed to calm growing tensions in France about the economic situation in the country.

The tax reduction itself will apply to those households who are taxed exclusively at the lowest 5.5% rate of taxation in France. They will receive an increase in income in 2009 averaging around €200 in the year, rising to €800 for a family of five. The measure will benefit around 6 million households.

As French income tax is collected in arrears, the concession applies to income earned in 2008. Given that one of the payment dates for income tax was last month, President Sarkozy has concluded that households will be relieved of having to pay the remaining two instalments, effectively resulting in a tax reduction for these households of 66% this year. Those who pay monthly will receive a reimbursement of any overpaid taxes.

To be eligible for the tax reduction your net income in 2008 must not have exceeded €11,673 per fiscal 'part' of the household, although the measure has been framed so that households just outside this income threshold will also benefit.

As a household composed of more than one person will have a number of 'parts' (depending on its size and composition), it does mean that families on quite large incomes will benefit.

Those who would have otherwise paid income tax at the lowest rate were it not for the fact that they benefited from a tax credit in the year, will now also receive another tax credit!

Despite the apparent support that President Sarkozy appears to be giving to those on the lowest incomes, the announcement has met with widespread criticism, as only around half the households in France actually pay income tax!

Thus, out of 34 million households in the country, only some 19 million are liable to French income tax.

Indeed, 1% of all households account for 37% of the total revenues collected from income tax.

Revenues generated from the tax only accounts for around 20% of total income collected in taxes. Arguably, therefore, the main purpose of income tax in France is not to raise revenues, but to redistribute from the rich to the poor.

There are many critics who argue that, far from reducing the level of income tax, it should be increased, in order that other, more regressive taxes could be reduced. 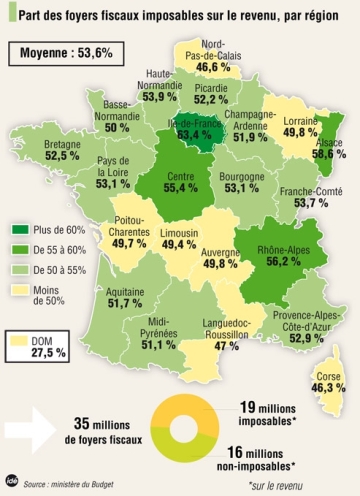 As the adjacent image shows, the liability to income tax varies around the country, with around 63% of households in the Ile de France who pay the tax, whilst it is only around 47% in Languedoc Roussillon and Nord-Pas-de-Calais.

These differences reflect the varying levels of income in different regions of France. Whilst the average national income is €21,930, it rises to €28,308 in the Ile de France, and it is only €18,853 in the Nord Pas de Calais.

Within Paris itself the differences are even starker, with average incomes of €56,950 in Paris Ouest, whilst only a kilometre away in Seine-Saint-Denis it is €18,852.

You can read more in our guide to Tax in France.