A new official service offers localised information on the projected climate in the different regions and departments of France for 2035.

What are the forecast temperatures in the Dordogne in the future? Or how about the level of rainfall in Brittany, or the number of days of summer in Provence?

Well, now you can find out courtesy of a new interactive website launched by Meteo France providing localised climate projections up to 2085.

The website is called Drias, a short acronym for the long and very English title 'Providing access to Data on French Regionalized climate scenarios and Impacts on the environment and Adaptation of Societies'.

The site has been created with the specific purpose of making more accessible to professionals and the public alike the different climatic models for France, down to a very local level.

It is part of a national plan, put in place over a year ago, to prepare the country for an increase in temperatures of around 4°C by the end of the Century.

The part of the site likely to be of most interest to the public is rather inaptly titled ‘Parcours expert’, through which it is possible to examine three alternative scenarios – ‘pessimiste, intermédiaire, optimiste’ - for temperature and rainfall for the main administrative areas of France.

The information is provided through a series of cartographical images of France, as on the example below, which shows the forecast number of days of summer in 2035, which can be compared against the reference date of 1970. 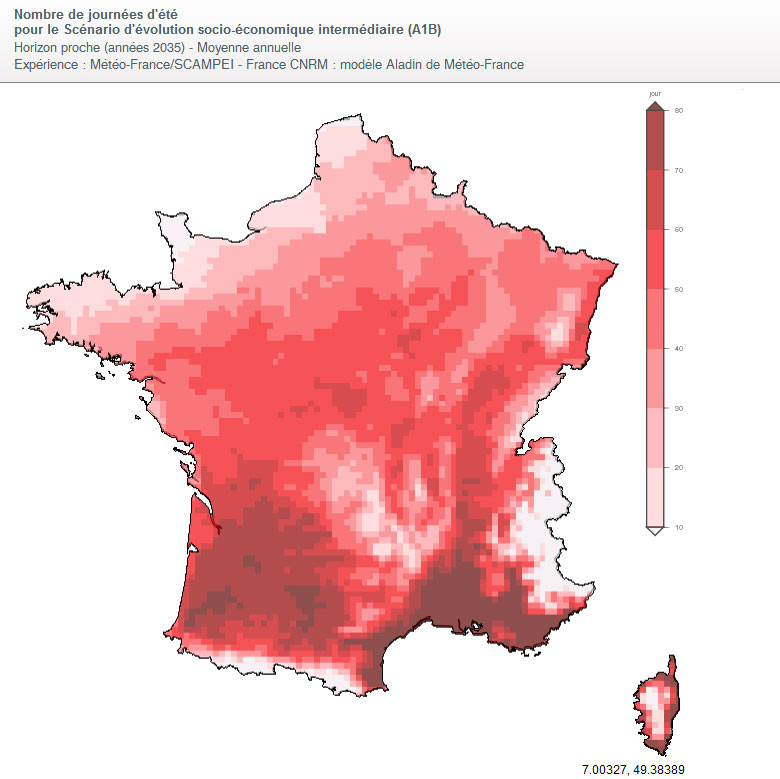