The French government has relaxed the law on the 80kph speed limit, but the operational advice has emptied it of a great deal of substance.

As we have previously reported, since July 2018 an 80kph speed limit has been in place on secondary roads in France that have no central barrier, and where road signs indicate no other speed limit applies.

The decision to introduce the speed limit has been hugely controversial, opposed by most departmental councils and one of the sparks that ignited the yellow vest protest movement.

In rural areas the measure was seen as another decision made by a metropolitan elite who did not understand conditions outside of Paris. Surveys carried out have shown that around 80% of the population have expressed a wish to return to the 90kph limit.

Although the reduction in the speed limit was aimed at reducing the level of road fatalities there were concerns at the time there had not been enough evidence to support the decision. Nevertheless, recently published figures show that last year, the first year of the lower speed limit, the number of road deaths was the lowest in recorded history, down 9 on 2018 to 3289.

In the face of widespread opposition, last month the government introduced a new law granting departmental councils the discretion to revert to the 90kph speed limit.

However, tight conditions have been imposed that in practice make it difficult for them to make use of their new discretionary powers.

As part of the process, departmental councils are required to undertake an accident study and submit the proposal for consideration to the local road safety committee, the Commission Départementale de Sécurité Routière. Although the decisions of the committee are only advisory, they carry substantial weight.

This committee is chaired by the local préfet, the senior government civil servant in the area, and comprises other government representatives, as well as councillors and road users.

In turn, the departmental committees have also been issued with ‘guidance’ by the government controlled national road safety committee (Conseil National de la Sécurité Routière) to assist them in making the decision.

Amongst the advice given, the CNSR have stated that there should be no return to 90kph on stretches of road less than 10km long, that had public transport stops along them, that have a substantial number of heavy goods lorries using them, or which are used by agricultural vehicles – in other words, most roads in rural areas! One departmental councillor has stated that with so many conditions, "il faudrait avoir des routes dans les nuages".

In addition, the roads eligible for the 90kph limit are those that belong exclusively to one department, and which do not pass through any hamlets, or have any junctions. The advice makes clear that any change must also be accompanied by the installation of clear signage, at the councils' cost.

Some roads affected by relaxation of the law are also under the control of central government, not the departmental councils, and the government has stated that it is not its intention to reduce the speed limits on these roads.

In a belt and braces move, the préfets have also separately been issued with instructions which state that they and all other government representative on the road safety committee must adopt a strict interpretation of the guidance and that they should vote against any increase that does not comply with it. They have urged préfets to take legal action if local councils increase the speed limit which does not comply with the advice.

Emmanuel Barbe, the minister for road safety, has insisted this advice was not “a legal constraint” but rather “recommendations to explain under which conditions it would not be a major risk to return to the 90kph speed limit.”

Nevertheless, the local councils claim that the new rules restrict them from making any changes.

Some departments have labelled the new law ‘a trap’, as it appears to put responsibility back in their hands but in reality merely shifts the blame to them when they are unable to reinstate the 90kph speed limit.

Going against the advice of the local road safety committee is likely to place departmental councils in jeopardy, as they face the risk of legal action from those involved in an accident on such roads.

To date, therefore, although some departments have expressed interest in increasing the speed limit, fewer roads are being considered. Amongst those departments leading the charge are Haute-Marne, Charente, Deux-Sèvres, Côte-d’Or and Seine-et-Marne.

Conversely, over one-third of departmental councils have cast their vote against any increase, whilst an approximately equal number have yet to decide.

The following graphic shows the position as at the end of January. Those departments coloured red have decided against any increase; those in green for an increase, and in grey a decision has yet to be made. 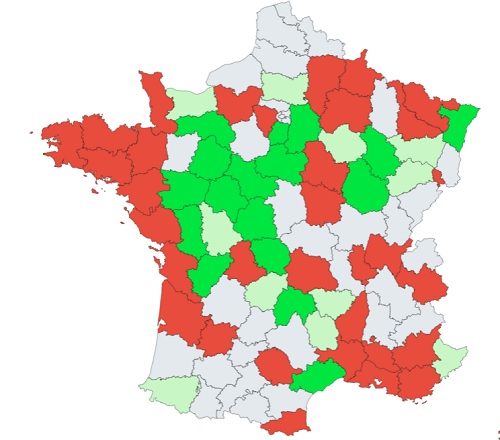