The Tour de France, the most prestigious cycle race in the world, will start on 4th July.

Around 15 million spectators line the route to watch the race, an occasion like no other in France that seems to unite a whole nation.

Countless millions around the globe also watch on their television. The number of television stations covering the event almost outnumber the number of cyclists in it! 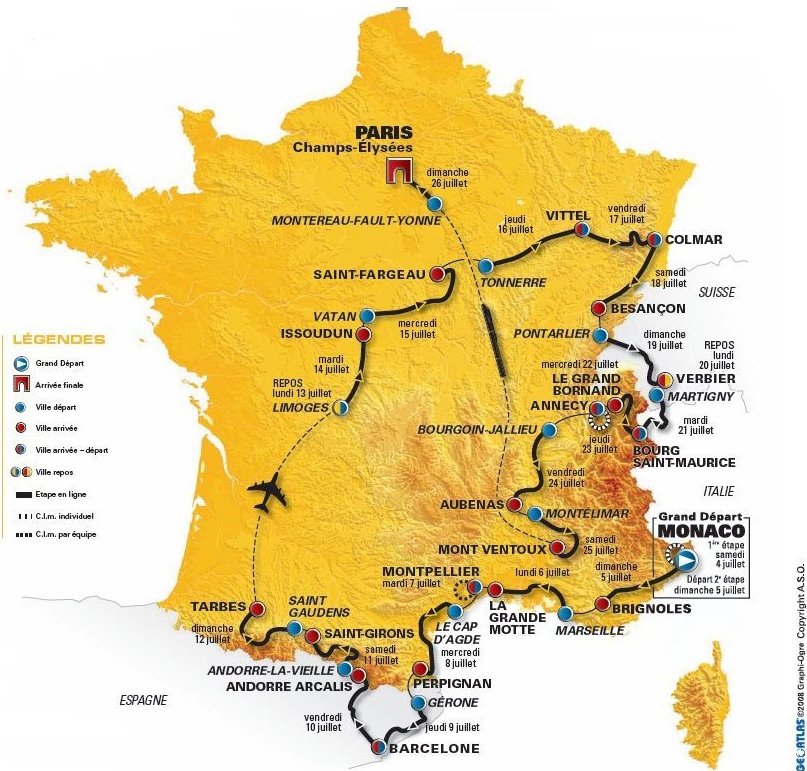 This is the 96th Tour de France. The race takes place over 15 days. It cover 3,500 kilometres, during which the riders average a staggering 40km/h over the 21 stages of the race.

Before the race starts tradition dictates that a presentation of all the teams takes place, with a 15 kilometre parade that will take place on July 2nd to introduce the 20 teams and their 250 riders.

This year the race will start in Monaco, and it will also pass through Spain, Andorra and Switzerland.

As usual the race will end in the Champs Elysées in Paris. The day before the finish the cyclists will face the brutal Mont Ventoux in Provence, a mountain that caused the death of British rider Tommy Simpson in 1967, and a peak that the celebrated Belgium cyclist Eddie Merckx described as 'impossible' . This is the first time in the history of the race that this mountain is to be climbed on the 20th stage and represents a huge sports challenge for the particpants.

Another novelty this year is that, after an absence of two years, the team time trial comes back.

Inevitably, in the lead up to the race the issue of doping has dominated the headlines. There has been a huge polemic around the racer Tom Boonen, who was tested positive for cocaine last April. Tour organizers have banned the former world champion from this year's race, but Boonen has made a legal challenge to the decision arguing that his drug use was outside the competitive framework of the sport.

Who will succeed Carlos Sastre to the title this year? Will Lance Armstrong win the race for the eight time? We will know the answer on July 26th!