Crime Levels in France in 2015

The French national crime statistics agency have recently published a analysis of the crime levels in each department of France for 2015.

Average violent crimes in the year were 8.09 per 1000 population whilst average burglaries were 5.53 per 1000 population. (We shall resist the tempation to make international comparisons because of the differences and shortcomings in reporting and data collection.)

The study shows highest levels of violent crime in the the Ile-de-France, and around the cities of Marseilles (Bouches-du-Rhône), Lille (Nord) and in Nice on the Cote-d'Azur.

Lowest levels of violent crime were recorded in the departments of Lot, Gers, and Lozère.

The pattern of figures for burglaries was somewhat different, with the Auvergne-Rhône-Alpes region showing a high concentration of such crimes in the cities of Lyon (Rhône) and Grenoble (Isère), alongside Toulouse (Haute-Garonne), Beziers (Herault) and Nantes (Loire Atlantique), and several more rural departments, notably Lot-et-Garonne and Tarn-et-Garonne.

At the other end of the scale the lowest ratio of burglaries was in Lozère, Manche and Cantal.

Using the same legend as above, the graphic below shows the average levels of burglaries for each department. 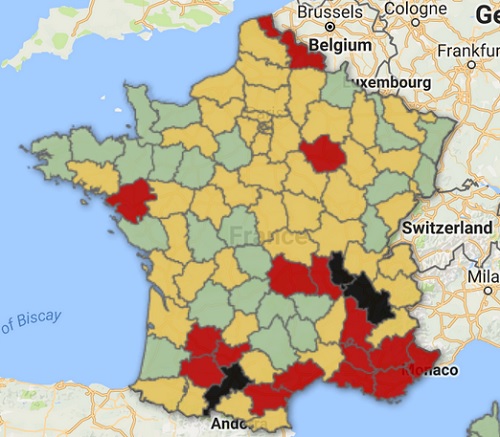 If read in conjunction with one another, then those departments with the worst crime figures are Seine-Saint-Denise, Paris, and the Bouches-du-Rhône.

On the same basis, the safest departments of France are Lozère, Cantal and Manche.

The actual figures for each department are shown below.