Service Charges in Apartments in France 2017

What might an owner expect to pay by way of an annual service charge for an apartment in France?

Service charges in apartment blocks in France are set by the apartment owners themselves through a general meeting, on the advice on the managing agents, the syndic.

Just what you might expect to pay is going to depend on a range of factors - the location of the property, the services provided, the size of your apartment, the fees imposed by the agents, and the maintenance and improvement requirements of the building.

Although there are no official statistics which give a comparison of the charges and trends, some light can be shed on the issue from a range of surveys carried out each year by private sector bodies.

A recent substantial survey carried out by MeilleureCopro, an on-line barometre of copropriété service charges, found that outside of Paris the average charge was €23m2, although where all services were provided (lift, parking, collective heating, caretaking) it rose to €37m/2.

Within Paris the average charge was €40m/2, rising to €51m/2 where all services were provided.

On a regional basis, the lowest average charges were in Brittany at €16m/2, whilst the Ile de France had highest at €35m/2.

The average annual charge varied from €960 in Brittany to €2,040 in the Ile de France, as shown on the table below.

Another recent study by Syneval, a broker who advises apartment owners on the choice of managing agents, showed that it was not only the range of services that affected the level of the service charge, but also the size of the apartment block, with owners in smaller blocks inevitably penalised by higher fees charged by the managing agents.

In their study of apartment blocks in the Paris, Ile-de-France and Lyon they found that in smaller blocks with up to 10 apartments the managing agents fees per owner were up to twice the amount of those containing 50 or more apartments. In Paris, the average amount per owner in a small apartment block was €419, compared to €207 in an block containing 100 apartments.

They considered that the fees in les petites copropriétés had risen significantly in recent years, mainly as a result of the Loi Alur 2014, which imposed greater controls on managing agents, and required that sinking funds be established for major works where one was not already in place.

Last year, a survey carried out by 'OSCAR' (l'Observatoire national des charges de copropriété de l'ARC) showed the average service charge for an apartment in a block outside of Paris having the full range of services was €36.40/m2, similar to the MeilleureCopro survey.

According to OSCAR, for an apartment measuring 60m2 it corresponds to an annual service charge of €2,806, with the breakdown as follows: 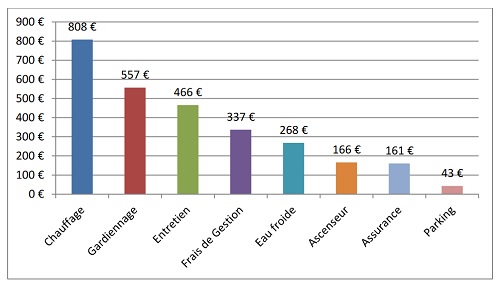