Who Pays the Most for French Property?

The British may well be the largest group of international buyers in France, but it is the Americans who are the high-rollers when it comes to the average spend.

As we reported in our last Newsletter, the British are, by a country mile, the largest group of international buyers in France, accounting for around one-third of all purchases by non-resident foreign property buyers.

However, when it comes to the average price paid for a property they are way down the pecking order, at an average of €254K (2014), well below the overall average international spend of €315K.

Last year it was the Americans who spent the most of all nationalities, paying an average of €615K per property.

The Russians, who topped the table of high-spenders in 2012 and 2013, dropped down the table last year to sixth position, behind the Spanish, the result no doubt of weak economic performance and sanctions at home.

Of course, the amount spent does vary by region, with significantly higher sums spent by all nationalities in Provence-Alpes-Côte d'Azur, the Rhône-Alpes and the Ile-de-France.

It is the large number of transactions by the British in other cheaper areas of the country that brings down their overall average.

Thus, in the Limousin and Poitou-Charentes, Brittany and Normandy over two-thirds of the properties purchased by international buyers are British where the purchase price paid barely reaches €100K.

In Aquitaine, nearly 60% of international buyers are British, who paid an average of €198K per property.

Yet, when it comes to Paris and Provence-Alpes-Côte d'Azur the British invest at a commensurate level with other nationalities.

Buyers from the USA only accounted for 2% of all foreign purchases last year, and Norwegians even less at 1.3%.

After the British, the largest group of international buyers are the Belgians (16% of transactions), who spent an average of €233K per property.

Expatriate French nationals themselves paid an average of €298K, with a quarter of all their acquisitions being made in the Ile-de-France.

The average price paid by the British has remained relatively static for the past three years, as the following graphic shows. 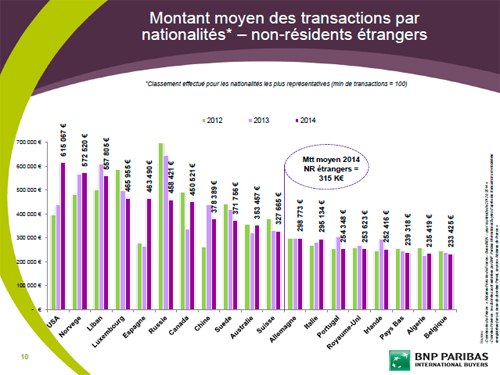 Next Article: Second Homes in France