The Rich in France

A new study defines a monthly net income of €3,470 as being ‘rich’ in France.

According to the independent research group, l’Observatoire des inégalités, there are around five million individuals in France who can justifiably consider themselves to be ‘rich’.

Although there is no legal definition of just what constitutes being in such a privileged group, the authors define it as an individual whose income is twice the average monthly standard of living.

That means that around five million individuals, or 8.2% of the population, make the cut.

A couple would join this club with a net income (after tax) of €5,205 per month, whilst the threshold rises to €7,287 for a couple with two children and €8,328 with three children.

By coincidence, there are also around five million individuals who are, by official standards, considered to be poor, defined as having a standard of living no greater than 50% of the average income (€867 per month).

The authors state that, with the exception of Switzerland, France is the country where the wealthiest 1% has the highest standard of living.

The French national statistical agency, Insee, considers those who are ‘affluent’ to be those with a net income of at least €3,070 per month, nearly 7 million individuals. 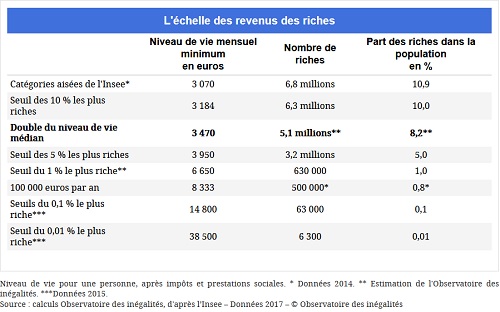 Using a separate definition based on assets or wealth (patrimoine) the authors consider that 23% of individuals have net wealth double the national average of €320,000, with 16% (4.6 million) having wealth three times greater than the national average. The 10% most fortunate (2.9 million) have a wealth of at least €607,000, whilst the top 1% net wealth of at least €2m.

There are of course individuals who are off the scale, even by the terms of this analysis, such as Bernard Arnault and his family, owner of luxury brand LVMH, with a wealth of at least €70 billion, greater than the value of the entire housing stock of Toulouse.

The rich are also getting richer. While the number of wealthy people is stable, the same cannot be said for their income. In 1996, the gap between the median standard of living of the population and the average standard of living of the richest 10 per cent was €27,800 per year. In 2017, it was €36,300. The gap has widened by almost €8,500 annually.

Who are the rich?

On average, they are older than the general population. Two-thirds of the top 10% highest income earners and 70% of high net worth individuals (the wealthiest 10%) are over the age of 50.

When they are employees, the wealthiest people account for 51% of senior managers, whereas this socio-professional category accounts for only 11% of the remaining 90% of employees.

Finally, among the richest 10%, one person in three lives in the Paris region and one in ten lives in the capital itself, while only 16% of the poorest 90% live in the Île-de-France region and 3% live in Paris.

Certain districts in the west of Paris and several communes in the Hauts-de-Seine, led by Neuilly-sur-Seine, have the highest concentration of wealthy individuals.