October saw Sterling reverse gains made against the euro in recent months, edging lower throughout the month, says Ben Scott.

GBP/EUR weakness in this period can be largely attributed to the euro being a key benefactor from the prolonged US debt crisis which saw the US Government shutdown. This can be seen from point A on the graph, which also represents the October high of 1.1998 (Interbank throughout).

Of more concern to euro buyers will be growing evidence that Sterling negativity can also be attributed to signs of slowing economic recovery in the UK, leading to suggestions that Sterling has been riding the crest of an unsustainable recovery.

Sterling’s consistent decline throughout October resulted in a nine-week low of 1.1647 on 30th October, trading at an average of 1.1801 in the month. 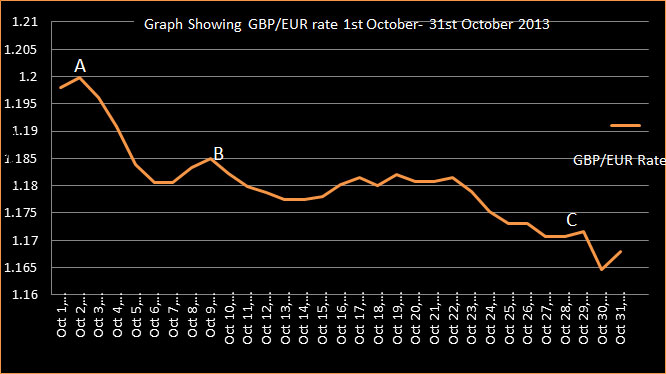 On the back of lower than expected manufacturing and construction output figures, early October saw unease grow for the sustainability of the UK economic activity.

Simultaneously the euro was supported by improving economic data from the eurozone and improved sentiment from the European Central Bank (ECB) and the European Union.

The euro was further, bolstered by the political stability established after the Italian Government survived a ‘confidence vote’ - despite the efforts of previous Italian Prime Minister Silvio Berlusconi.

Economic data from Germany continued to improve throughout October adding to euro strength, whilst an apparent change in policy from the ECB suggested that, in contradiction to previous comments, they were now content for the euro to strengthen from current levels.

Comments from ECB President Mario Draghi that “the current strength of the euro was of no concern”, supports this break from policy at the start of the year, reflecting the improving and positive attitude towards the future of the eurozone, which continues to benefit the euro.

Sterling’s decline from point B was again as a result of conflicting economic data, with weak industrial production figures from the UK adding to concerns of a deceleration in recovery.

Meanwhile the respected Centre for European Economic Research (ZEW) survey showed that economic sentiment in the eurozone reached the highest level since April 2010, adding further impetus to the euro rally.

Sterling experienced further weakness from point C, the catalyst coming in the form of the CBI (Confederation of British Industry) report indicating a clear decline in economic activity from the perspective of UK business. Should this trend continue through the vital Christmas period then further Sterling weakness seems likely.

Numerous factors will determine the direction of GBP/EUR rates with the short-term outlook looking positive for the euro.

Conflicting views for the outlook on interest rates deny Sterling any sustainable short term direction. The Bank of England still keen to play down talks of interest rate hikes before 2016, and comments by member David Miles stating that it would be “Catastrophic to raise interest rates before unemployment comes down by a meaningful amount”, is proving damaging to Sterling.

On the other hand reports show business owners remain bullish about the UK economy going forward, supported by UK Gross Domestic Production figures released on 25 October 2013 showing UK economic output rose by an impressive 0.8% in Q3.2013. Comments from BOE Governor Mark Carney that “the rate of growth in the UK is toward the top end of advanced economies” also go some way to dampen economic concerns, and provide some support for Sterling.

Constantly improving data and economic sentiment from Germany, the economic powerhouse of Europe, is now being bolstered by key European countries such as Spain.

In October Spain announced economic growth for the first time in two years, which allowed the eurozone’s fourth largest economy to exit its second recession since 2008. The fact that Germany is no longer the only European country showing signs of economic recovery suggests the worst is truly over for the eurozone.

Next Article: South West A65 Autoroute in Difficulty