The Coastal Paths of France

There are nearly 5,000 kilometres of designated public coastal paths in France, offering walkers a fabulous resource for exploring the varied French coastline.

The 'sentiers du littoral' is the official name of the public footpath network that weaves its way around the length of the French coastline.

Locals more commonly refer to it as the sentiers des douaniers, in recognition of the fact that parts of it have their origins in the routes created by coastguard officials at the end of the last century to combat smugglers.

It is now protected by a law dating from 1976, which enshrined a right of way for pedestrians along the coastline, a law that was reinforced by the Loi Littoral 1986, restricting development along the coast.

Large parts of it are in the public domain, but a great deal also traverses land in private ownership, with owners having been obliged to cede a right of way to walkers.

The presence of built-up areas by the sea that occurred before safeguarding legislation does sometimes fragment the route, and can also make the implementation of easements difficult, but most are long and attractive enough for casual walkers.

Once created the path is managed by the prefecture, in collaboration with the local councils.

With over 30% of the French coastline, the Brittany region contains 46% of the total lineage of the national coastal path.

The coastlines of Lower-Normandy and of Provence Alpes Côte d’Azur also contain over 500 kilometres of routes, either open or under study.

Outside of Upper Normandy, where there are substantial risks of cliff landslides, all the maritime regions of the country have three quarters of their parishes crossed by a significant coastal route.

Local authorities in most areas have gone to substantial efforts to make them a tourist attraction, with extensive works having been carried out in many areas, and by the promotion of themed walks reflecting the characteristics of each route.

Many routes are short, well sign-posted and easy to walk. There is no need to arm yourself with a rucksack and boots.

However, not all of the coastline is entirely accessible, and not all of it closely follows the coastline, either due to it being too dangerous, or to compromises having to be made with urban development.

Some routes are inevitably having to be remade due to coastal erosion or storm damage, so may be rerouted or temporarily closed.

Accordingly, if you are planning one of the more lengthy or difficult routes you would be well advised do your research before you start out. The best starting point is the local tourist office website.

The following graphic shows the nature of the land encountered along the coastline walks. 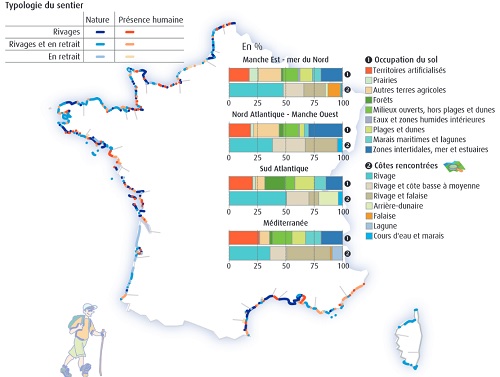