One in ten homes in France is a second home, concentrated in particular areas of the country, and overwhelmingly owned by French nationals.

There are over 2.5 million second homes in France and contrary to popular belief less than 10% are in foreign hands.

Of the circa 250,000 second homes in foreign ownership, around a quarter are held by the British, making them the largest group of international owners.

Not surprisingly, at a regional level the largest number of holiday homes in mainland France is located in sun-drenched Provence-Alpes-Côte d'Azur (377,015), swiftly followed by the winter wonderland of Rhône-Alpes (318,098).

However, in percentage terms it is Languedoc-Roussillon that takes the laurels, with 21% of all properties in second ownership, as can be seen from the following table.

Drill down an administrative level to the department and a more substantial degree of concentration in particular areas is evident.

The department with the highest percentage of properties in second ownership is the Hautes-Alpes, where 45% of residential properties are second homes, mostly of course ski chalets or apartments.

The mountain departments in France also have a comparatively high number of holiday homes - Savoie, Lozère, Alpes-de-Haute-Provence where second homes account for over 30% of the stock, and Pyrénées-Orientale, Ariège, Haute-Savoie, Hautes-Pyrénées Creuse, and Cantal where over 20% are second homes.

The following graphic gives a pictorial representation of this distribution, with the darker colours indicating those departments with the highest percentage of second homes. 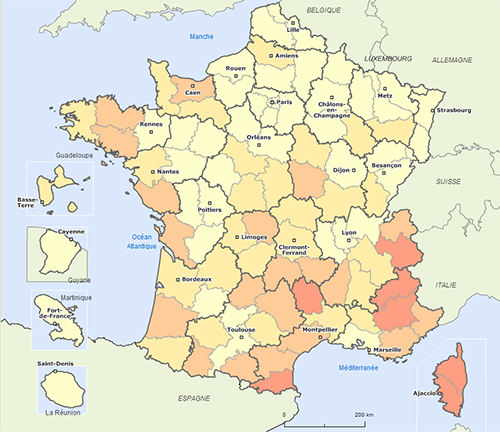